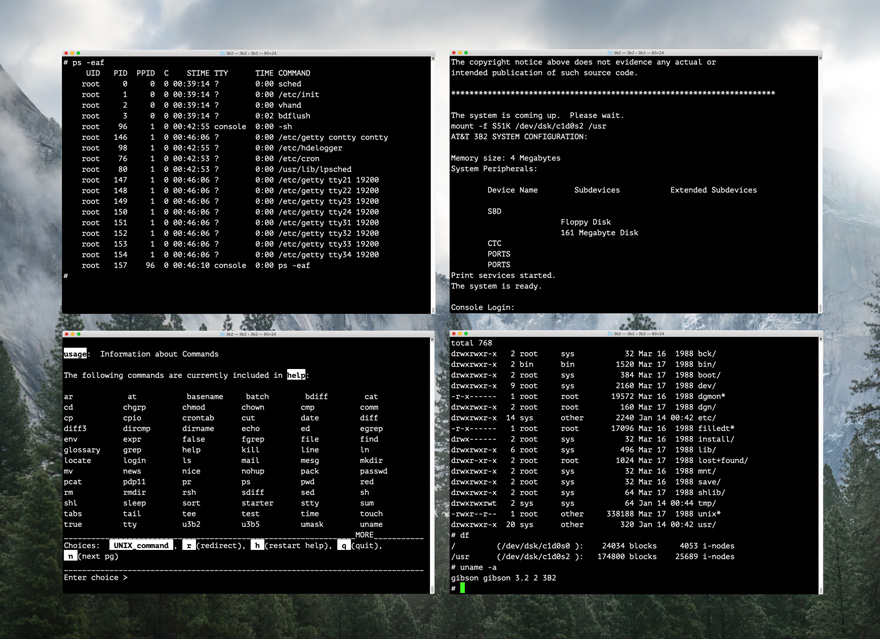 The AT&T 3B2 was a series of small, multi-user UNIX computers developed by AT&T in 1985. They were part of the larger 3B family of UNIX computers based on the Western Electric WE32000 and WE32100 series of CPUs and peripherals. What makes the 3B2 historically interesting was its use as the primary porting platform for AT&T UNIX System V Release 3.

The 3B2 simulator is part of the Open SIMH simulation framework.

The following standard 3B2 systems are simulated. More information about the 3B2 and 3B2 systems internals is cataloged on my website here.

The source code is open source, and is available on GitHub from the official SIMH repository.

Building on GNU/Linux or macOS

Building on GNU/Linux or macOS is fairly straightforward:

The binary will be built into the ./BIN/ directory.

If any additional libraries are required, the build process will alert you to the fact and let you know what you need.

The standard way to build on Windows is with Visual Studio. Visual Studio Express 2008 is required at a minimum, and is used as the baseline for all SIMH projects.

Simply open the following two projects in a new solution:

You should then be able to build the solution.

If you would like to install UNIX from scratch, there is now a guide that will walk you through every step.

I encourage you to try this method, but if you don’t want to go through all that work, keep reading.

To make getting started as painless as possible, I have prepared several hard disk images with UNIX pre-installed.

For the 3B2/400, all disk images are of the type HD161, to give you maximum free space. They were built on a simulator configured with:

To use any of the images below, simply download it, uncompress it, rename the uncompressed file to hd161.img, use the supplied boot.ini file (editing it to suit your own needs) and 3b2_400.bin ROM image, then start the simulator.

On Mac or Linux, start the simulator with the command:

On Windows, start the simulator with the command:

The UNIX installations on these images are pristine and have not been configured. No system passwords have been set. You will have to log in as the setup user to do a system setup.

For the 3B2/700, all disk images are of the type SD630, a 630MB SCSI disk. It was built on a simulator with the following configuration:

To use the hard disk image below, simply download it, uncompress it, and use the supplied 3b2_700.bin ROM file, the boot.ini configuration file (editing it to suit your own needs), nvram.bin NVRAM file, and tod.bin TOD clock file.

(The tod.bin and nvram.bin files are optional. They record the configured state of the simulator when UNIX was installed. If you don’t want to use them, you can skip them, but your clock will be reset to the year 2000!)

The UNIX installed on this image is pristene and has not been configured. No system passwords have been set. You should log in as the setup user (no password) to do a system setup.

The 3B2 simulator is part of SIMH, the Computer History Simulation Project. Full documentation for the SIMH platform is availble here:

A complete description of SIMH would be much too long for this document, but in brief, it is a platform for writing and hosting computer simulators. SIMH implements a great number of simulators, of which the 3B2/400 is only one.

Below is a “Getting Started” guide to help ease you into the world of SIMH in general, and using the 3B2/400 specifically.

Getting Started with the 3B2/400 Simulator

The 3b2-400 binary (or 3B2-400.exe under Windows) is a standalone application. On Linux, all you need to do is CD into the directory where you’ve downloaded 3b2, and type:

On Windows, open the cmd.exe shell, CD into the directory where you’ve downloaded 3B2-400.exe, and type:

In either case, you will be greeted with an interactive SIMH shell where you can type commands. It looks like this:

To quit at any time, just type quit and press the Enter key.

Any command that you can type to the SIMH sim> prompt can be stored in a startup file, and this is generally the easiest way to do things. For example, you may create a file named boot.ini, and enter the following commands:

When you start the 3B2 simulator, you can pass the name of this file to the program as an argument, for example under Linux

This will launch the simulator and run all the commands in the file.

This line sets the available system memory to 4MB, which is the maximum amount that a 3B2/400 could address. Other options are 1M and 2M.

This loads the ROM into read-only memory space in the simulator at adress 0x00000000. The -r flag is necessary to indicate that the file being loaded is a ROM.

This command tells the simulator what type of hard disk is attached. idisk0 is the first emulated hard disk drive (idisk stands for “Integrated Disk”). A second hard disk may optionally be attached as idisk1.

Unless otherwise specified, HD72 is the default, because a 72MB hard disk was the largest that AT&T originally shipped with the 3B2/400.

This line attaches the disk idisk0 to a virtual hard disk file named hard_disk.img, creating the file if it doesn’t exist.

Note that the 3B2/400 expects hard disks to be low-level formatted before they can be used. That is addressed later in this document.

This line, similar to the line above, attaches a virtual floppy disk image to the floppy drive. (ifloppy for “Integrated Floppy”)

These two lines create files to store the state of NVRAM (Non-Volatile RAM) and the Time-of-Day Clock. When these devices are attached, the 3B2/400 simulator will remember important settings and the current time of day between boots.

All 3B2/400s have two serial ports on the system board: One for the console terminal, labled CONSOLE, and one for a second serial connection, labeled CONTTY. This command enables the secondary serial port and attaches it to Telnet port 9000. You can then use a Telnet client to connect to the host that the simulator is running on on port 8000, and you will be connected to the virtual CONTTY serial line.

This enables the Cartridge Tape Controller (CTC) card. This is a 23 MB Cipher “FloppyTape” QIC tape device present on 3B2/400 computers. The virtual tape drive may be connected to a file with the command attach ctc <filename>

The PORTS card is an optional expansion card for the 3B2/400. Each PORTS card supports 4 serial terminals, and up to 4 PORTS cards may be installed in a 3B2/400.

These commands enabled PORTS support, sets the number of simulated terminal lines to 16 (4 cards), and listens for connections on port 9000.

You may see several different messages.

If you have never booted the 3B2/400 before, or if you have deleted the nvram.bin NVRAM file, you will see the message

This is normal. Once the 3B2/400 has booted at least one time, and stored its settings into NVRAM, this message should not be repeated.

Disk Not Formatted Yet

If the hard disk image you’ve attached idisk0 to has not been formatted yet, or if no disk image is attached, you will see the following message.

Once the disk image has been formatted, or if you use a pre-built image from below, you should no longer see this message.

If either of the above messages appear, or if UNIX has not yet been installed, you will see the following message

Type the default system maintenance password, which is mcp, and press Enter to continue.

Once you’ve entered the mcp password, you should see the message

Finally, you will be asked which device to boot from.

Once UNIX has been installed to the hard disk, the system always boots automatically from the first hard disk.

To stop SIMH at any time, type the control sequence Control-E. This will return you to the SIMH prompt (sim>), where you can type quit.

Transferring Data Between the Simulator and a Host

One interesting challenge is, “How do we share data between the host system and the emulated 3B2?”

There are three options available for this, ranging from simplest to hardest.

C-Kermit is a very simple program that transfers data over serial lines. It’s very easy to use. The main downside is that transfers are very slow. They’re limited to the speed of the emulated serial port, which is 9,600 baud by default, and cannot go above 115,200 bps.

Caveat: On the emulated 3B2, the size of file you can transfer is limited by the ulimit setting, and by default cannot be more than 1MB in size. You may increase the ulimit to overcome this limitation.

To use Kermit, you will need two pieces of software:

C-Kermit for Linux is available through most distribution’s package managers.

C-Kermit for the 3B2 is available here, on a diskette image:

Installing Kermit on the Simulator

NOTE: You can skip this step if you have used the pre-built hard disk image from above, because it already includes C-Kermit 5A(189) pre-installed.

To install C-Kermit, first attach the floppy image to the simulator with the following command:

Then, in SVR3 UNIX, mount the floppy:

Copying Data from the Host Computer to the 3B2

Your file should transfer to the 3B2 at about 1200 bytes per second. Not blazingly fast, but tolerable.

Copying Data from the 3B2 to the Host Computer

This is really just the reverse procedure. You do exactly the same things, except on the 3B2 C-Kermit session, you type:

And on the Host Kermit session, you type:

This method is quite easy to use, but unfortunately limited to files no larger than about 22MB in size, since that’s the size of each blank tape.

The basic idea is to write a CPIO archive to a specific location on a blank tape image under Linux, and then in SVR3 to read the CPIO archive out of the raw tape device.

On the Linux host

Now we can restore from tape, just like you would on a real 3B2.

This will restore the contents of the tape archive to the current directory.

This method is really a tremendous hack, but it’s probably the fastest way to transfer very large that are too big to fit onto a CTC tape image. The basic concept is the same as the one used for CTC tapes, except you’re writing to a blank area of a hard disk instead.

On the Linux Host

Now we reverse the process on the 3B2 by using dd and cpio to read from the raw emulated disk.

(Note that we skip 648 blocks instead of 810. That is intentional, because the first cylinder is not mapped to the /dev/rSA/disk2 device.)

If your only experience with UNIX-like systems is through modern Linux, you should be aware of a few things.

First, SVR3 is not loaded with fancy utilities like Linux. The base 3B2 installation doesn’t even come with man pages.

You can change these default terminal control characters to something more familiar with the stty utility.

Some terminal emulators send CTRL-H to delete a character. On such a terminal, you can use:

To check the current values:

If you want to use the vi editor in visual mode, you will need to define your TERM environment variable to something that SVR3.2 recognizes. It’s generally safe to set this to vt100.

You can put this into your .profile file to set it automatically each time you log in.

Don’t forget to shut down cleanly by typing: