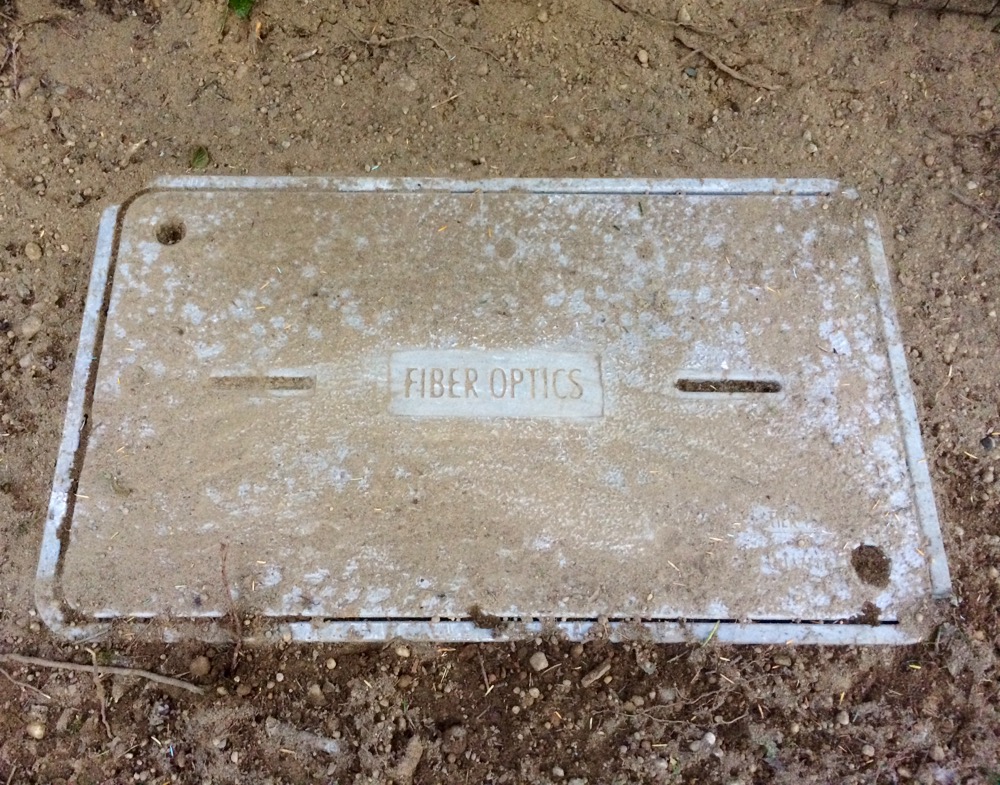 It’s been a long time since I wrote about my tragic tale of Internet woe I owe you all an update, and I’m very happy to say that at long last, we have broadband. It’s kind of a long story.

Back in February when all hell was breaking loose and we were becoming desperate for Internet connectivity, I reached out to the Kitsap Public Utility Commission (KPUD), who were listed as providing fiber optic Internet service on the Washington State Broadband map (a web site that is unfortunately no longer in service). KPUD was quick to point out that yes, they provide wholesale Internet service over their fiber to ISPs, but not to consumers. That said, they are in charge of running the infrastructure, so they were at least willing to come out and see how much it would cost to run their fiber to our property. Their best guess: $125,000. Well, obviously that was not going to work, so I didn’t do any more follow-up with them.

Fast forward to the middle of March, when Consumerist wrote about my situation. The story kind of blew up and went everywhere, and for a few days I was inundated with press contacts and questions. It was surreal, especially because I was out of town on business when it all happened. But then just as I was getting ready to fly back home, I got a call from KPUD. They had read the article too, and were curious if they could come out and do a better estimate for me than the back-of-the-envelope work they’d done earlier. Of course, I said yes.

This time, KPUD sent out some plant engineers to look at the infrastructure on the ground. They called me up and asked me to come down to the office so we could talk about options. We worked together on a satellite photo of the area and shot some ideas back and forth. Their original price was based on trenching the entire way, for example. Could we maybe run it on poles instead? And rather than bore under the state highway, is there a pole crossing we could use there, too? And most importantly, could I possibly shop around and get my own contractor to do the work, instead of requiring KPUD to do it?

At the end of the day, we’d turned that $125,000 estimate into a vastly smaller number, one that was not only doable, but reasonable. One that I could afford. One that was cheaper than selling the house!

We shook hands on it, and the ball started rolling.

It turns out that we were literally the very first people in all of Kitsap County to try to get KPUD fiber optic broadband to the home. KPUD typically serves schools, libraries, colleges, and ISPs. They do very much want to serve residences too, but state law forbids them from retailing directly to consumers, so as of yet they have no way to do this directly and no residential pricing model. So we had to be creative.

KPUD is first and foremost the provider of municipal water service to Kitsap County. When building out new water service, there is something called a “Developer’s Extension” by which a home builder or developer can pay out of pocket for new service, working directly with a contractor to do the construction, and then sell the infrastructure back to KPUD for a token amount once it’s done. This way, taxpayers don’t cover the construction, the homes get their water, and everybody’s happy.

We decided to try doing the same thing, but for fiber optics. They’d never tried this before, so KPUD had to run it past their lawyers to make sure it would work out. To my delight, they gave it their blessing.

It took almost two months from our first handshake to the install. I found a contractor willing to do the work, and he came up with a plan and ran it past KPUD to make sure they were OK with it. Then there were permits to draw up, bureaucracy to deal with, forms to fill out, and lots of time to twiddle our thumbs. In the end, once everything was signed off, the actual installation only took about three days. They hung the fiber up in poles from the nearest splice point (about 2800 feet from the house) right to our driveway. At the driveway, the fiber goes underground. Trenching was done using this fairly magical small tractor with a micro-plough on the front that cut into the earth and deposited fiber conduit behind it as it went. It saved vast amounts of money over doing an open trench the entire way!

The final step was having KPUD come out to install their CPE (Customer Premises Equipment). It consists of a little Cisco router and a fiber termination box. I watched the KPUD engineer do their fiber splice with this amazingly fancy little automatic splicing box that probably cost more than my down payment. 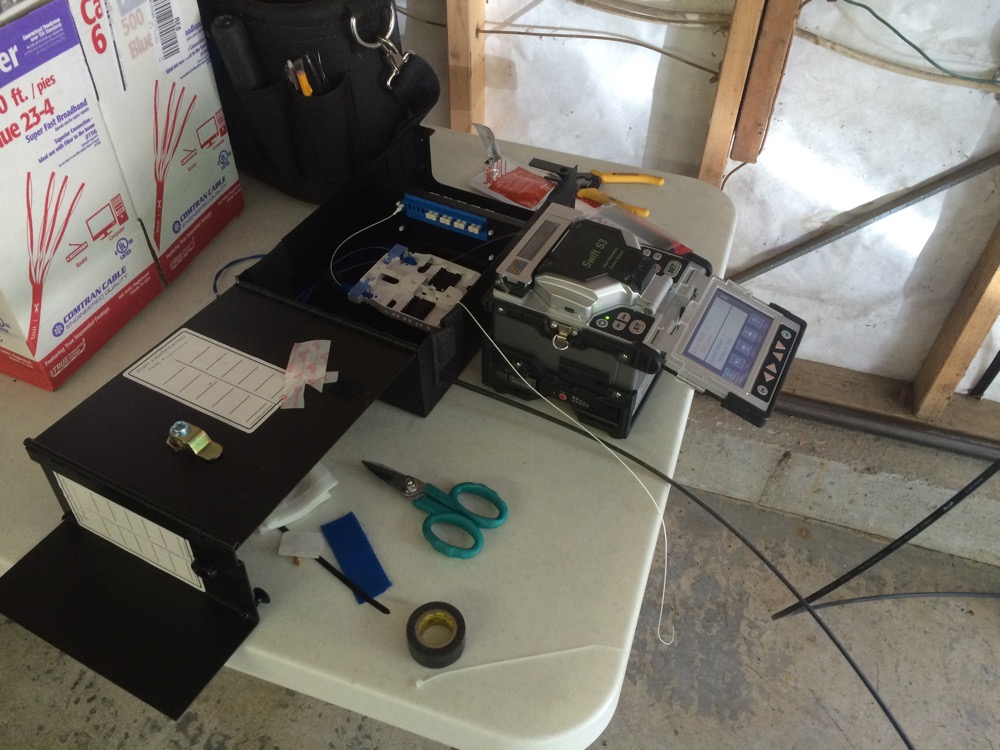 By the time the engineer left, I had a 100 Mbit synchronous fiber circuit up and running. I just didn’t have any data, yet.

But who actually gives me my Internet connection? Not KPUD! They step out of the picture as soon as the hardware is installed and the fiber is terminated.

As I said, KPUD only provides the physical connection. They work with a back-end provider called NoaNet that provides the IP transport and sets the pricing. But NoaNet also does not sell directly to consumers, they can’t. They only sell wholesale bandwidth to ISPs, so I had to find one of their customers to work with.

That’s how I found DT Micro, an ISP that peers with NoaNet and provides commercial bandwidth over KPUD’s fiber. I called DT Micro up and signed a contract with them for 100 Mbit commercial Internet. To make sure everything was on the up-and-up, I even formed a company (Loom Communications LLC) to be a separate entity to buy the bandwidth.

But What About Everybody Else?

But what about everyone else out in Kitsap county who needs broadband and can’t get it from Comcast or CenturyLink? That’s a lot of people!

KPUD is currently working with NoaNet to try to come up with a consumer pricing model for the county so they can actually do this. They may not be able to sell directly to consumers themselves, but they can work with other ISPs who want to do consumer access. But not everybody is going to want to do a Developer’s Extension like I did. That’s where Local Utility Districts (LUDs) come in.

A LUD is a contiguous geographic area of homes that want to come together and buy service from KPUD. They can pay for the work with property taxes amortized over 20 years, which makes it a very attractive model. Typically, the total install price per house would be somewhere in the $1000 to $5000 range, and since it would be paid off via taxes over 20 years the monthly cost would be something like $8 to $20 — totally reasonable, considering how much the broadband would increase the value of the home.

KPUD really wants the LUD model to succeed. They haven’t done one yet, but I’m very hopeful that they’ll be able to get folks interested in doing this. It would be a fantastic way to bring broadband access to larger parts of the county who are currently under-served, or not served at all.

So here we are. I didn’t have to sell my house after all — KPUD came to my rescue. We were able to come up with a creative solution to a tricky problem. I paid a lot of money to a contractor to get KPUD fiber installed, then formed a business to buy the Internet access. I needed commercial-grade Internet for work anyway, so I’m happy with that arrangement.

I’m not done, though. I hope KPUD is able to form some LUDs in the area, and I’d like to help in any way I can. I’ve met too many people here who are frustrated with their connectivity (or lack thereof).