On Sunday, April 28 2012, I picked up a PDP-11/35 from a friend who had been storing it in a shed for many years. The system has been home to generations of spiders and mice, and needs more than just a little bit of TLC. 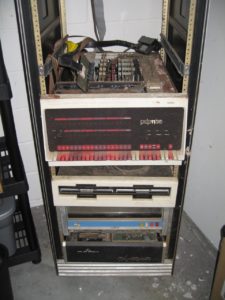 The provenance of the machine is kind of interesting. The friend who gave it to me grabbed it from the loading dock at ATARI in Milpitas, California, when it was being scrapped. They were apparently using it in some kind of standards or verification engineering role, but it’s not known what. He later moved to Washington state, where the machine was stored in a shed for some time. Unfortunately, the climate and the local wildlife took their toll.

I’ll document ongoing progress on restoration here on the blog. Luckily, my initial inspection suggests that things are not as bad as they look. The electronics are in fair condition, with only very little surface corrosion on some IC leads. The metal chassis and power supply case have some bad surface rust, but can be stripped and re-painted. The front panel and switches are mechanically sound. I think it is definitely worth restoring!