Well. Here it is, the final entry for my Summer Retrochallenge project. I wanted to do more, but as so often happens, real life intervened and I didn’t have nearly as much time to work on it as I’d wanted. C’est la vie!

But I’m still proud of what I accomplished. I have a working ROM monitor, and I’m happy to report that as a final hurrah, I got it fully integrated with Lee Davison’s Enhanced 6502 BASIC.

I didn’t start this project thinking I’d tackle BASIC integration, but as Retrochallenge drew to a close, it seemed like it might be the best use of my precious time. What I mean by “Integration” here is simply having my ROM monitor code live side by side with BASIC and provide the underlying I/O functionality needed for BASIC to talk to the terminal and get input, plus the ability to take over and run in the foreground when the user wants it. 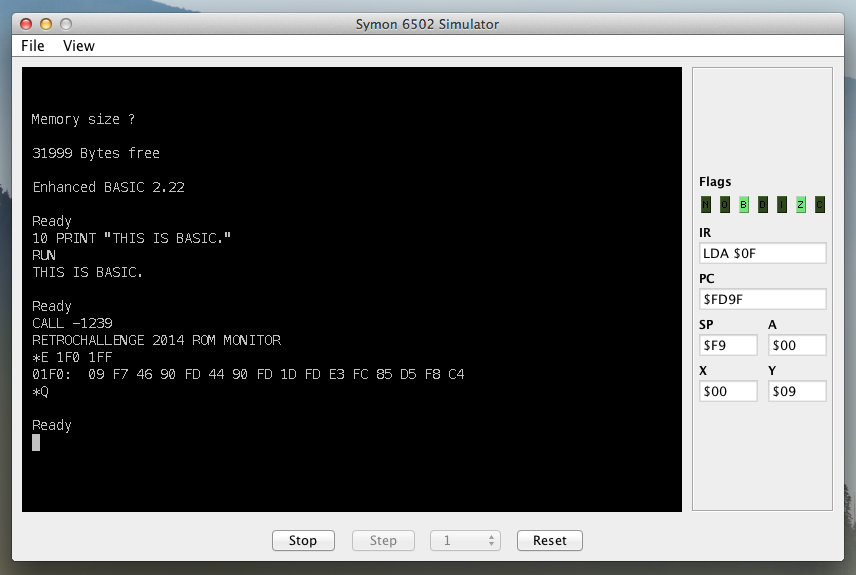 It actually turned out to be fairly simple to get the integration working.

The first thing I had to do was re-organize my memory usage so as not to conflict with EhBASIC’s memory map:

There’s not much room left in Page Zero after EhBASIC gets done with it, but the locations $DE thorugh $E2 are free, so I made use of them. Page Two is similar, so I stuck my variables all the way up at $02A0 and on.

It’s a little ugly and could easily be optimized at the expense of readability, but hey, it works!

So that’s it. With just those changes, I was pretty much able to integrate the monitor into EhBASIC in just a few hours. As always, all of my code is available on Github for your viewing pleasure.

I’d also like to add that this has been a fantastic Summer Retrochallenge. There were so many amazing projects, I can’t even pick a favorite. I’ve really enjoyed reading what everyone else has been up to, and I’m already looking forward to January. Onward and upward, everyone!